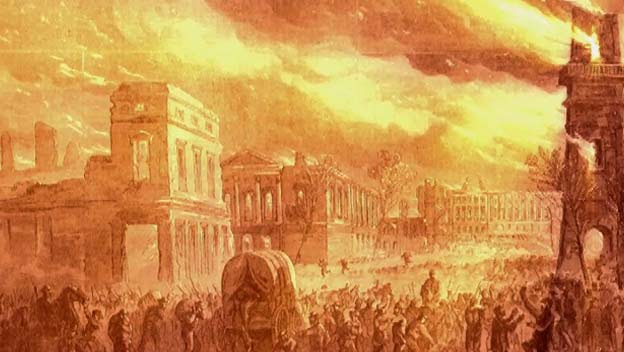 Sherman personalized American civilians in the South as his enemy — he branded their acts of self-defense as “cowardly” and deserving of swift retaliation — in effect denying that the South had the right to resist an invasion of its own country. While Sherman’s mental health is held in question by many, he was in truth only carrying out the orders of his master, Lincoln.
Bernhard Thuersam, www.Circa1865.com

“Article 44 [of US Army General Orders No. 100] . . . specified that “All wanton violence committed against persons in the invaded country, all destruction of property not commanded by the authorized officer, all robbery, all pillage or sacking, even after taking a place by main force, all rape, wounding, maiming, or killing of such inhabitants, are prohibited under penalty of death, or other such severe punishment as may seem adequate for the gravity of the offense.”

Paradoxically, it was . . . Union general, William Tecumseh Sherman, [who] gradually evolved his own personal philosophy of war along line which were clearly at variance with the official pronouncements, and in his practical application of that philosophy became one of the first of the modern generals to revert to the idea of the use of force against the civilian population of the enemy.

On the eve of the Civil War, Sherman could look back upon a career of dependence, frustrations, and failures. “I am doomed to be a vagabond, and shall no longer struggle against my fate,” he wrote his wife from Kansas in 1859. As he travelled northward in late February, 1861, to face once more the prospect of renewed dependence upon his father-in-law, his brooding over the ghosts of his own failures became mingled with gloomy forebodings concerning the future of the nation itself.

Passing from the South, where it seemed to him that the people showed a unanimity of purpose and a fierce, earnest determination in their hurried organization for action, into Illinois, Indiana and Ohio, where he found no apparent signs of preparation . . . he began to develop the deep conviction that he was one of the few people who understood the real state of affairs. It was only a short step from there to resentment against those who seemed unwilling to heed his warning or advice.

Convinced that Washington’s failure to act promptly on his requests [as a brigadier in Kentucky] was due either to indifference to the situation or to a willingness to sacrifice him, he developed a state of nervous tension in which his irritability and his unreasonable treatment of those about him antagonized the newspaper correspondents and led some . . . to publish stories questioning his sanity.

[He was relieved of command and] It was during this period of inactivity that the full import of these charges of insanity began to bear in upon him and to create in his mind an agonizing sense of humiliation. [He wrote his brother John] “that I do think I should have committed suicide were it not for my children. I do not think I can ever again be entrusted with a command.”

Two months later . . . he wrote to his brother that the civilian population of the South would have to be reckoned with in the months of war ahead . . . “the country is full of Secessionists, and it takes all [of a Northern] command to watch them.” Having become convinced that [telegraph] destruction was being accomplished by civilians rather than military personnel, he found it easy to judge the whole South on the basis of what he saw . . . Here was a manifestation of his tendency to arrive at generalizations by leaping over wide gaps of fact and reason and to proceed on the basis of his inspirations and convictions with the utmost faith in the soundness of his conclusions.

In this case his generalization led him to visualize the people themselves as a significant factor in the conduct of the war and to think in terms of a campaign against them as well as against their armies. [Writing to the Secretary of the Treasury], “When one nation is at war with another,” he said, “all the people of the one are enemies of the other: then the rules are plain and easy of understanding.”

[He continued]: “The Government of the United States may now safely proceed on the proper rule that all in the South are enemies of all in the North; and not only are they unfriendly, but all who can procure arms now bear them as organized regiments or as guerrillas.”

Sherman’s disposition to consider all resistance as treacherous acts of the civilian population prepared the way for the next steps in the development of his attitude on the conduct of the war.”