Time runs out for the traitoress 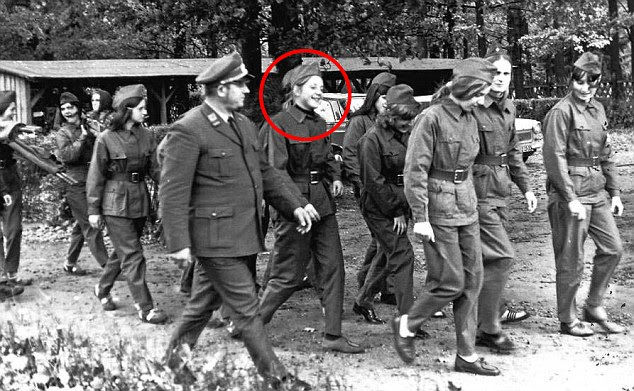 Mrs Merkel (circled) who was 17-year-old Angela Kasner when the picture was taken in 1972, is shown in fatigues marching with a group of friends and an East German officer.

It will be interesting to see if Merkel survives long enough to be put on trial for her crimes against Germany and the German people:

The griping over Merkel's policies has grown louder within her own party, the Christian Democratic Union (CDU). The meetings of the party's parliamentary group, which for many years radiated the boredom of an English gentleman's club, now resemble tribunals against the chancellor. Meanwhile, Finance Minister Wolfgang Schäuble, the strong man in Merkel's cabinet, also expressed his own dissatisfaction, in distant Peru, by cracking jokes about border controls in the former East Germany.

Merkel is looking increasingly isolated. Government sources say she has made refugee policy her personal concern, and now she is being left to deal with it on her own. Last week, Interior Minister Thomas de Maizière confided in his Luxembourg counterpart, telling him that Merkel did not have a plan, only "cold feet."