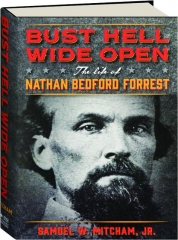 Jefferson Davis thought of Forrest as a genius; Gen. Robert E. Lee, though he had never met Forrest, proclaimed him the greatest battlefield commander of the war; Gen. Joseph E. Johnston “named him the greatest soldier the war produced, and said, “Had he the advantage of a thorough military education and training, he would have been the central figure of the war."
www.Circa1865.org  The Great American Political Divide

“[Forrest’s] target on December 20 [1862] was Trenton, Tennessee. Memphis and Jackson aside, it was the home of the largest Union garrison between Mississippi and Kentucky. Trenton’s women, waving their handkerchiefs, pointed Forrest to the Yankees, who had fortified the supply depot with eight hundred bales of cotton but without any cannon.

Forrest led the attack, supported by [Captain Samuel] Freeman’s guns, and the garrison surrendered quickly. When Northerners tried to burn the depot, Captain J. P. Strange and [Forrest] captured the arsonists and made them quench the fire.

The garrison commander sadly handed over his sword to Forrest, wistfully adding that it was a family relic. Forrest examined it and handed it back to him, saying that he hoped the next time he drew it, it would not be against his own people.

Forrest learned that the federals had forced the residents of Trenton to sign oaths of allegiance to the United States. He ordered Captain Charles Anderson to collect all of these papers. They were piled on the courthouse lawn and burned.

The Rebels had also captured a large quantity of counterfeit Confederate money. It had no value because the engraving and printing were so perfect and the quality of the paper so high that any Southerner would immediately recognize it as bogus. Forrest and his men kept is poker money.”