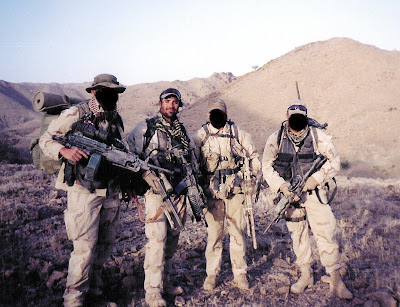 At the very end of his second tour in Afghanistan he died during a night time combat assault while fast roping into a known enemy cave complex.

(P.S. I have been told that he is forever memorialized in the Special Forces Museum at Ft. Bragg for some type of a quick fuse that he developed on the battlefield in Afghanistan and that there is a display with a mannequin of him wearing his uniform there that looks just like him. If you ever get over to Fayetteville I would love a picture of the display.) I shall. It's been a few years since we've been there.

(Please obscure the faces of the other operators as they are still serving over there and I wouldn't want to do anything to jeopardize them. Redleg) 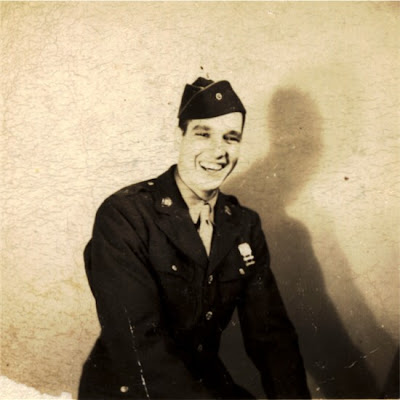 He landed on Red Beach at 0345 hours 9 September 1943 (Operation Avalanche). He fought up the Italian peninsula and was involved in actions at innumerable unnamed hills, the push up through the Liri Valley at Mount Maggiore, Mount Lungo, Mount Sammucro, Mount Difensa, San Pietro, & Cassino. He was involved in the breakout from the Anzio beachhead where his regiment found and exploited a gap in the German lines which ended months of stalemate and finally led to the advance on and capture of Rome. During the pursuit of German forces from Rome, on 11 June 1944 Company M (heavy weapons company) and Headquarters Company were counterattacked by a large German force. Their position was overrun with 33 missing or killed. I have been unable to determine total casualties from this engagement. After some of the fiercest combat and amid the most grueling conditions encountered in the European theater of operations, my young uncle met his end alone leaving no one to carry on his name. His division was pulled out of the lines and eventually out of Italy 2 weeks later 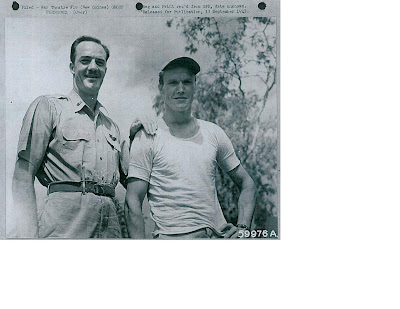 Great uncle on the right.

Memorialized at Manila American Cemetery and Memorial, Tablets of the Missing

After transfer from the 49th Fighter Group's 8th Fighter Squadron He started flying long range combat missions starting in July of 1943 and his previous experience served him well, he claimed three Japanese aircraft in three days during mid-August. On the 16th he fought Nakajima Ki-43 Oscars over Marilinan, New Guinea, and shot down one of 12 claimed in the squadron's first combat. Two days later the 431st reported another dozen victories, and he bagged a pair of Oscars near Wewak. Beginning in October, the Fifth Air Force launched a series of strikes against the Japanese naval air complex at Rabaul, New Britain. The 431st was engaged near the target on 23 October, and he claimed a Mitsubishi A6M Zeke. Back again on 2 November, he was seen to shoot down another Zeke but failed to return to base. It was assumed that he ran out of fuel and crashed. He married shortly before heading overseas and never had any children.

...... that was a good piece Brock. Having grown up among a long line of military men with over 15 years of service myself it definitely appears today that we are a dying breed, an anachronism in our own time. It appears that there is no longer any place for those of us who still hold on to ideals hammered into us during our years of service…ideals such as loyalty, duty, respect, selfless-service, honor, integrity, personal courage or the 5 Cs of an NCO (courage, candor, competence, commitment, and character).

Inversely, it appears that those of us who still cling to those military ideals are reviled and told that such antiquated concepts no longer apply, pertain or even matter. The only thing that seems to matter these days is how many lies can I tell and how many people can I step on to achieve my goals and to attain everything that I am entitled to.

I weep for the country that my children and grandchildren have inherited from me. I have brought them up to believe as I do. Have I done them a disservice in instilling such ideals and morality in them when our world has grown so obviously corrupt and contemptible?