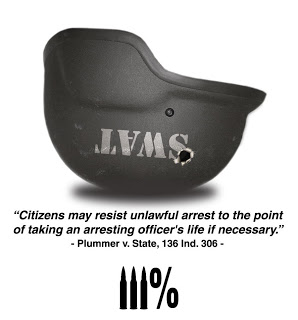 Let me be Frank with you (that's actually my middle name :-): I am a former peace officer, a former cop. I don't brag about that, because there is so much corruption and abuse of power in law enforcement these days that it makes even me gag. I do not call myself a former law enforcement officer, because it was never my intent to enforce the law. When I worked in that field, it was due to my desire to help people, to keep them safe. One of the reason I quit working in that field (I quit in 1995) is because it was becoming apparent, even then, that more and more men and women starting in the field were interested in power, in exerting their authority over the mere citizens they believed they were charged with controlling. Yes, I mean that quite sincerely, they felt it was their duty to control the "baser instincts", the bad behavior, the ill intentions of the civilians under their "care".

Please, don't bother to whine to me about all of the "good" cops out there. The deputy sheriffs, the police officers, the marshals, constables, and the Federal agents of so many agencies (most agencies in which there should not even be enforcement agents, like the Department of Education, for pete's sake) who they will claim are actually there to do the right thing. I will stipulate that there are still "a few good men" out there who want to do what is right. I will so stipulate - as long as you are willing to stipulate that those few good men don't have the balls to stand up and point fingers at all of the LEOs who abuse their authority, beat and use excessive force on citizens, kill pets and even the very civilians they are tasked with Serving and Protecting.

Can you imagine, for a minute, what it is like for a good priest - a man who loves his G-d and his fellow man, who wants to see to the hearts and souls and very bodies (when in ill health) of his parishioners cared for and protected - when he discovers another priest is a pedophile, has been molesting children, perhaps within this good priest's parish? Can you imagine the anguish and the anger a good priest would feel, knowing that a fellow priest was abusing not just his trust and authority, but the very honor and duty of the priesthood, and damaging children in the doing?


A truly good cop - a man or woman who is a peace officer, and not just a law enforcement officer - suffers the same anguish, the pain, the embarrassment, and the anger when a fellow cop abuses his authority. It is worse when they also not only abuse a citizen's rights, but actually physically abuse them as well. The thought of an LEO beating, punching, kicking, or - G-d forbid - raping a woman, is enough to engender a supreme rage in someone who knows their duty to the citizens for whom he works. The thought of LEOs actually killing innocent citizens is enough to engender a killing rage in a good cop. Not in the rare occurrence when a mistake is made, as with the transit cop in DC who thought he had pulled his taser and actually pulled his handgun, but as in the recent case where a Houston police officer shot and killed a double amputee in a wheelchair who supposedly threatened him with a pen.