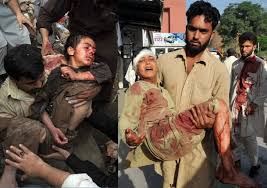 Human rights advocates were floored on Monday night when NBC News published the details of an alarming Justice Department memo detailing the protocol for sending drones after United States citizens. It's not as if they hadn't suspected that the Obama administration's top secret drone attack protocol contained some unsavory details. They just didn't expect them to be so frightfully broad. The scoop by Michael Isikoff is actually startling not for the details but rather for the lack of details. It's very vague about a decision-making process that puts American lives on the line. Put simply, the government believes that a lethal drone attack against an American citizen is justified if the targets are a) "senior operational leaders" of al-Qaeda or b) "an associated force."

One of those two qualifiers is infinitely more worrisome than the other. Going after leaders of al Qaeda makes sense. That's what the War on Terror is all about, right? Breaking down networks of violent terrorists and keeping Americans safe. If an American happens to be caught up with al Qaeda, someone like Anwar al-Awlaki, then well… they shouldn't be surprised if they're getting chased by drones. At least that's what we've been told so far. How and why these attacks are carried out by drones is also detailed in the memo, but we'll get back to that in a second.

But what does "an associated force" mean?