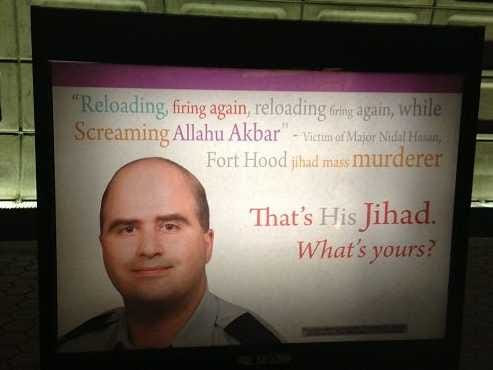 Muslim Brotherhood and Hamas front groups, with eager help from the mainstream media, have embarked on a cynical nationwide campaign to confuse Americans about the meaning of jihad, and make us complacent about the threat of jihad and Islamic supremacism.

At AFDI, we're fighting back.

Finally, after months of wrangling and First Amendment violations, our AFDI jihad truth campaign has hit the streets of Chicago and Washington, DC to counter the deceptive and misleading #myjihad propaganda of the Hamas-tied Council on American-Islamic Relations (CAIR).

The unfettered access and influence the Muslim Brotherhood has to the mainstream media is astonishing. But we are going over the heads of the mainstream media with our ads, and taking the truth directly to the people -- and in the process, we're forcing the media to discuss the grim and bloody reality of jihad.

We don't need lessons in jihad. September 11, Fort Hood, the Fort Dix Six, the Christmas tree bomber, the Christmas day bomber, the Times Square bomber, Jihad Jane, and the rest have taught us plenty. Our dead in the cause of Islam have taught us plenty. Over 20,000 jihad attacks around the world since 9/11, each with the imprimatur of a Muslim cleric, have taught us all we need to know.
We intend to run our jihad truth ads in every major US city, and especially to counter Hamas-CAIR's Big Lie campaign in every city in which it runs.

Americans deserve to know the truth about the threat we face. At AFDI, we are among the only ones still unafraid to tell it, and the only ones effective enough to break through the media's disinformation fog. Please help us today.

The American people who can are still capable of rational thought will get the message in a culture that restricts discussion of an enemy sworn to destroy us. Here is the latest national coverage of our AFDI counter jihad campaign in DC -- apart the quislings in San Francisco: