Bank of Cyprus big depositors could lose up to 60% 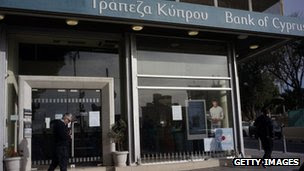 Up to 22.5% will go into a fund attracting no interest and may be subject to further write-offs.

The other 40% will attract interest - but this will not be paid unless the bank performs well.

It was known that the wealthiest savers at the Bank of Cyprus would take a large hit from the bailout deal - but not to this extent, the BBC's Mark Lowen reports.

Cypriot officials have also said that big depositors at Laiki - the country's second largest bank - could face an even tougher "haircut". However, no details have been released.

The officials say that Laiki will eventually be absorbed into the Bank of Cyprus.