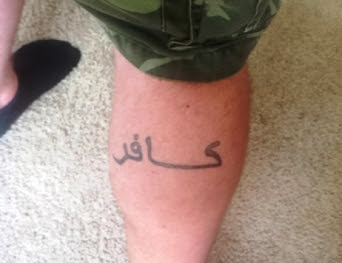 Eddie Bryant, a disabled combat veteran who served in Iraq was asked to leave a skydiving site in Lake Wales, Florida because he refused to cover a tattoo that offended Muslim soldiers from Qatar.

According to the vet’s blog — Adventures of a Broken Soldier — he is an avid skydiver with almost 300 jumps under his belt and was at Skydive Lake Wales on Wednesday, where soldiers from the country of Qatar were also being trained.

Bryant has a tattoo on the back of his right calf of the Arabic word for “Kafir.”

As he explains on his blog:


“Kafir (Arabic: كافر‎ kāfir, plural كفّار kuffār) is an Arabic term used in an Islamic doctrinal sense, usually translated as “unbeliever,” “disbeliever,” or “infidel.” The term refers to a person who rejects God or who hides, denies, or covers the “truth.”

As for his tattoo, Bryant writes: “The Muslim’s from Qatar saw that tattoo and complained to the drop-zone. Once they did so I was called to the back office and asked to cover it up by the owner.”

When asked in an email exchange how he was aware that the individuals in question were soldiers from Qatar, Bryant replied that a Skydive Lake Wales official informed him of this and that their skydiving equipment had the name of the country on it.