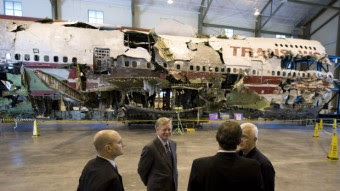 The impending release of a new documentary has dramatically revived media interest in the destruction of TWA Flight 800, the Paris-bound plane that blew up off the coast of Long Island in July 1996.

Although producers Tom Stalcup and Kristina Borjesson do not name names or point fingers, the video leads the viewer to believe that the U.S. Navy accidentally shot the plane down.

The video features a half-dozen truth tellers from within the investigation, and the news of it has inspired several more to step forward, including one who talked with WND about the disaster Friday.
Mack, not his real name, cautioned that his information was limited, but his insights had merit nonetheless. Mack was a crewmember on the sub, the USS Albuquerque.

This was one of three subs acknowledged by FBI spokesman James Kallstrom as being in the “immediate vicinity” of the crash site. The other two were the USS Trepang and the USS Wyoming.
Several days before the Flight 800 incident, Mack was involved in loading what he was told were “experimental missiles” aboard the sub. “This was not your normal load out,” said Mack.

The sub was heading for the testing area off the coast of New Jersey and south of Long Island. Mack did not go on that cruise.

He was driving with his wife when the news first broke of Flight 800′s demise. Before the government got hold of the narrative, there was considerable reporting about a missile or missiles.
“Do you think it was a terrorist?” his wife asked.

“God, I hope so,” said Mack. He explained that “his boat was out there.” If it wasn’t a terrorist, it was likely a Navy accident.