NC: Suspect shoots four before being shot by police 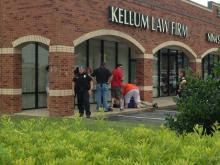 We lease from Norman, who also has an office in Morehead City as well as many other places. He is a KA, as am I, and a true Southern gentleman.

A man armed with a shotgun wounded one person at a North Carolina law firm Friday before crossing a busy street and entering a Wal-Mart, where he shot three more people before officers subdued him, police said.

Greenville Police Chief Hassan Aden said the suspect was shot by officers at the entrance of the store. He didn't have the conditions of those shot and didn't have a motive. Aden was scheduled to provide additional information at a news conference.

The gunman shot the first person at the Kellum Law Firm on the city's south side and across the street from the Wal-Mart. They said the suspect then crossed five lanes of traffic and entered the store, where he started shooting some more.