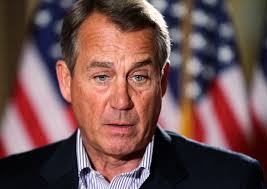 Boehner spoke to reporters during his regular press briefing after TheBlaze exclusively reported that 70 Republican House members are planning a political showdown over immigration reform and a bill they say will mean amnesty for illegal immigrants and election security for progressives and Democrats.