Photos: 9,000 Bodies Stenciled on a Normandy Beach To Remember the Fallen 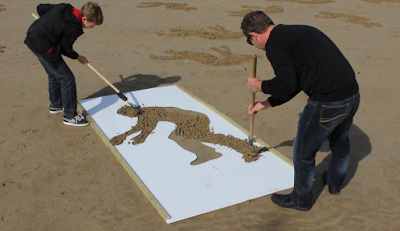 They carved 9K images into the sand.

The seaside town of Arromanches, France, looked quite different over the weekend. Nine thousand silhouettes were hand-drawn in the sand on the Normandy beach to commemorate the soldiers and civilians who died there during Operation Neptune on June 6, 1944.

This stirring tribute, called "The Fallen," was conceived by British artists Jamie Wardley and Andy Moss, who enlisted the help of 200 volunteers to mark the International Day of Peace over the weekend.

It took two years to prepare for the project, and the results, which were ultimately washed away by the tide, were heartbreaking. "All around us there are relics of the Second World War, but the one thing that is missing are the people that actually died," Wardley said. "We've very quietly made a big statement (MSN)