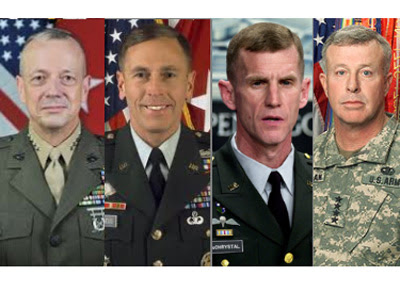 As a nation, we can afford bouts of economic downturns, civil strife and even some degree of political mistrust of our leaders. A nation can take definitive steps to recover these maladies. However, the one thing that America cannot tolerate is the compromising of our military, and since Obama has been president, the effectiveness of our military has been greatly compromised.

A Crisis of Military Leadership

The number of generals either drummed out of the service or forced into early retirement since Obama took office is growing by the month. Untruthful pretexts have been manufactured by the Obama administration to usher out many of our top military commanders. Many of these generals were among our most effective and experienced military leaders. Almost all of these generals are being replaced by men with less military experience and this fact alone leads to a less effective military.

This unprecedented parade of musical chairs, being played out against our military leaders, began when Obama demanded the resignation of General McKiernan. This marked the first time, since the time of the Korean War when General Douglas MacArthur was fired by President Truman in a disagreement over strategy, that a battlefield general was fired by a president. The strategy backfired in Korea and it backfired in Afghanistan as McKiernan was deemed to be to old school to suit Obama. He was old school to Obama because he wanted to kill the enemy while minimizing American losses. Obama wanted to adopt a policy which allowed the enemy to open fire first which, before Americans could return fire. This has surely caused the casualty rate to rise.