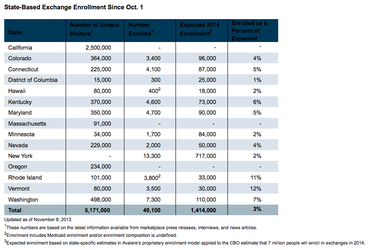 Oregon's health exchange ranks last of 12 state-based insurance exchanges in enrollment, according to a new analysis.

Avalere Health used online news reports and public statements to compare enrollment for 14 state-run exchanges. Those are the states choosing to build their own consumer marketplace under the new federal health law, rather than let the federal government handle it.

The result of the comparison is not a big surprise -- Oregon's online marketplace has not enrolled anyone -- but the numbers do put things in context.


"We have the governor best equipped to lead us into healthcare reform" says multimillionaire Earl Blumenauer, Oregon congressman, just weeks before Obamacare and Governor Kitzhaber's Kitzcare (Cover Oregon) went into effect. "Squeezing value out of it so it goes to people who are sick, need help, not having other layers of bureaucracy", he says as the massive multi million dollar ad campaign was being rolled out, soon to be followed up by the expansion of the state program by way of hiring 400 more people to shuffle the handwritten papers around because no one can input data through the website. "John Kitzhaber is recognized by this administration as a visionary"..."Oregon is in position to be a leader" he goes on to say. Fast forward to mid November, and Cover Oregon has yet to enroll one single person in the program, and ranks last in the independent Avalere study on state run
Posted by Brock Townsend at Friday, November 15, 2013