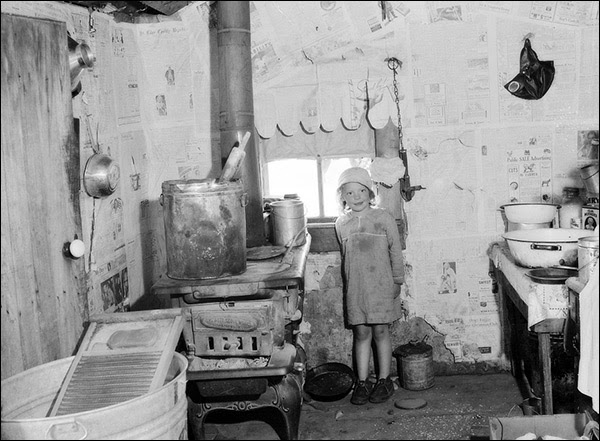 1936. A kitchen in the Missouri Ozarks

America came within a razor's edge of debt default, which many people rightly fear.  What some do not yet grasp, though, is that debt default of the U.S. was NOT avoided last month, it is INEVITABLE.  Debt default will ultimately result in the death of the dollar as the world reserve currency, and the petro-currency.  This final gasp will lead to hyperstagflation within our financial system, and third world status for most of the citizenry.  It is only a matter of time.
Brandon Smith at alt-market.com

How would you feel tomorrow if you read in the paper that a couple million spear-chucking cannibal savages had appeared in the south of your country and were marching north, killing and raping and eating everything in their path, regimented like zombies, attacking by ambush in overwhelming hordes? ... What would you do? Probably try to move to some remote caves high in the mountains where these creatures lack the endurance and toughness to reach. That's exactly what Neanderthals did.
Texas Arcane at vault-co.blogspot.com

The dirty little secret - When it comes to black mob violence, the same reporters who every day write about black caucuses, black colleges, black TV, and other race-based institutions, turn away. "We're color blind," they say. Many of these reporters are members of the National Association of Black Journalists.
Marlin Newburn at frontpagemag.com

Sharpton Blames Racism for 3/4 Killers and Victims Being Black - Black people are shooting other black people because of the NYPD's focus on black communities? So that must mean there are a whole lot of white people shooting other white people in New York that the NYPD doesn’t even know about because it’s too busy stopping and frisking project dwellers in Brownsville. If the NYPD were to focus on protecting white neighborhoods. It would be racist. When it focuses on protecting black neighborhoods, it’s racist and somehow responsible for all the shootings.
Daniel Greenfield at frontpagemag.com

The cost of "diversity" in universities - It is personally unfair, passes over better-qualified students, and sets a disturbing legal, political, and moral precedent in allowing racial discrimination; it creates resentment; it stigmatizes the so-called beneficiaries in the eyes of their classmates, teachers, and themselves, as well as future employers, clients, and patients; it mismatches African Americans and Latinos with the school, setting them up for failure; it fosters a victim mindset, removes the incentive for academic excellence, and encourages separatism; it compromises the academic mission of the university and lowers the overall academic quality of the student body; it creates pressure to discriminate in grading and graduation.
Roger Clegg at ceousa.org

Obama is an empty construct of what the future was supposed to be; young charismatic, post-racial, post-partisan and solution-oriented. Now he's already becoming old and outdated, a future that was, a future that might have been, a poster on an aging Occupier's wall, a fading magazine cover, another progressive dead end for a movement always dreaming of a tomorrow that never comes.
Daniel Greenfield at sultanknish.blogspot.com.au
Posted by Brock Townsend at Tuesday, December 03, 2013