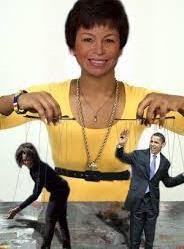 Who is Valerie Jarrett?

Her father, a pathologist and geneticist, ran a hospital for children in Shiraz in 1956, as part of a program where American physicians and agricultural experts sought to help communtize developing countries’ health and farming efforts. When she was five, the family moved to London for one year, later moving to Chicago’s Hyde Park in 1963.

Jarrett went to the exclusive University of Chicago Lab School before transferring to her mother’s alma mater, Northfield Mount Hermon (NMH), for the last two years of high school. NMH is a private coed boarding school on 1,565 acres of wooded campus bordering the Connecticut River in Western Massachusetts. Jarrett graduated from NMH in 1974.

Valerie attended Stanford as an undergrad, living at the African American themed Ujamaa House and earning a B.A. in psychology in 1978. She went on to get a Juris Doctor (J.D.) from the University of Michigan Law School in 1981.

After graduating from law school, Jarrett hired on as an associate at Ballard, Shepard and Pole Ltd. and spent 1981 through 1984 with the firm.