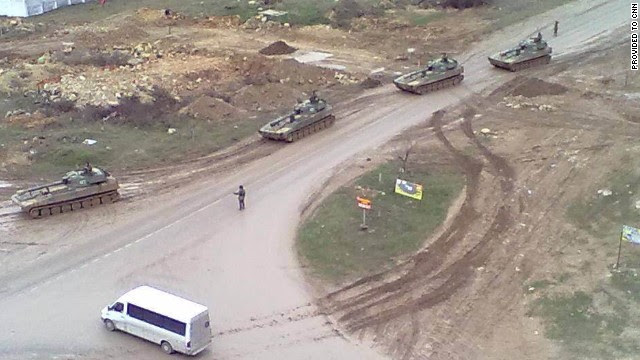 An image provided to CNN by a local resident shows Russian tanks on the move in Sevastopol, Ukraine.
As Ukraine's new leaders accused Russia of declaring war, Russia's Prime Minister warned Sunday that blood could be spilled amid growing instability in the neighboring nation.


Kiev mobilized troops and called up military reservists in a rapidly escalating crisis that has raised fears of a conflict. And world leaders pushed for a diplomatic solution.

In a post on his official Facebook page, Russian Prime Minister Dmitry Medvedev called the recent ouster of Ukrainian President Viktor Yanukovych a "seizure of power."

"Such a state of order will be extremely unstable," Medvedev said. "It will end with the new revolution. With new blood."