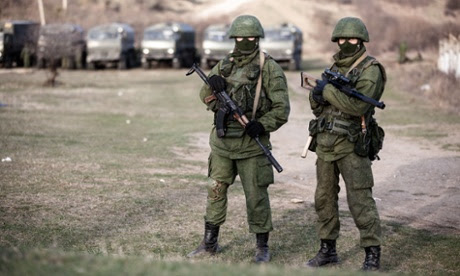 Alleged Russian soldiers in full body armour and armed with assault rifles next to the besieged Ukrainian military base in Perevalnoye close to Simferopol. Photograph: Daniel van Moll/NurPhoto/Rex

It's over with Husein.  Quit playing games.

At a press conference in Crimean capital of Simferopol, Rustam Temirgaliev, the region’s deputy prime minister, said the referendum was being held purely to ratify the decision of the Crimean parliament to join the Russian Federation, and the parliament had appealed to Russia to assist with this.

He said the decision, which also gave the go-ahead to the territory to begin preparations to join Russia, “comes into effect from the current moment”. The referendum would be held “only to confirm” the decision.

Temirgaliev said that as of Thursday, the only legal troops on Crimean soil were the Russian army. “Any troops of a third country will be treated as illegal band formations, with all the consequences that entails,” he said.