Russian Jet Passes Near US Warship 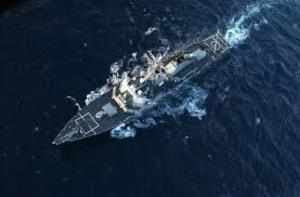 A Russian fighter jet made multiple, close-range passes near an American warship in the Black Sea for more than 90 minutes Saturday amid escalating tensions in the region, U.S. military officials said Monday.

In the first public account of the incident, the officials said the Russian Fencer made 12 passes, and flew within 1,000 yards of the USS Donald Cook, a Navy destroyer, at about 500 feet above sea level.

The U.S. warship issued several radio queries and warnings using international emergency circuits, but the Russian aircraft did not respond.

"This provocative and unprofessional Russian action is inconsistent with international protocols and previous agreements on the professional interaction between our militaries," said Army Col. Steve Warren, a Pentagon spokesman.

The fighter appeared to be unarmed and never was in danger of coming in contact with the ship, said the officials. The passes, which occurred in the early evening there, ended without incident. A second Russian fighter jet flew at a higher altitude and was not a concern, said Warren.

A U.S. military official also said that a Russian Navy ship, a frigate, has been shadowing the U.S. warship, remaining within visual distance but not close enough to be unsafe. The official was not authorized to discuss the incident publicly so spoke on condition of anonymity.