Time to Decide Federal Employees: Are You a Traitor or a Patriot? 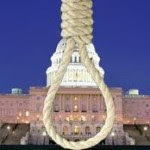 Americans live in a time of unprecedented tyranny through the enactment of unconstitutional legislation like the Patriot Act and the sham courts we call FISA. The entire Constitution was set on its ear by the passage if the NDAA which allows for the kidnapping of American citizens by the Federal government without following the due process of law.

Of course, we have also witnessed  a 100 mile wide Constitution-free zone instituted by DHS that runs along the entire border of the US. Investigative reporters Andrew Breitbart and Michael Hastings were murdered for what they presumably learned and were about to reveal. And, of course Ed Snowden is literally running for his life for revealing the criminal domestic spying activities of the NSA. As if these abuses were not enough, there is a relatively new federal spying program which has pretty much flown beneath the radar and this program poses a direct threat to every single federal employee and if you are a Federal employee, dust off your resume and preserve your humanity.