"A good part of the responsibility for the horrors of Anderson rests with General U.S. Grant" 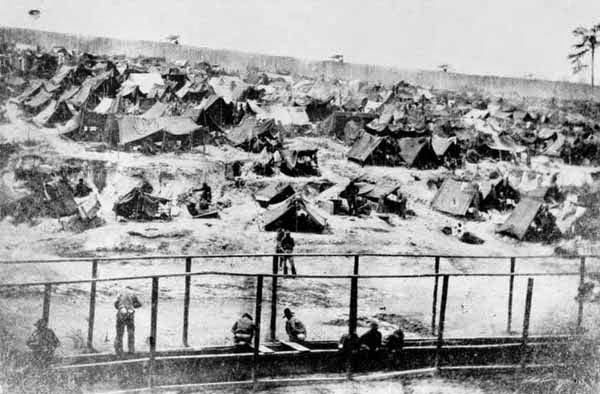 Failure met the 1863 humanitarian mission of Vice President Alexander H. Stephens, and the overtures of General Lee toward Grant for the exchange of prisoners which would relieve their suffering at Andersonville. President Jefferson Davis himself paroled a delegation of Andersonville prisoners in vain to personally ask Lincoln to intervene.
Bernhard Thuersam, www.Cicra1865.com

No Relieving the Andersonville Suffering

“I am certainly no admirer of Jefferson Davis or the late Confederacy, but in justice to him and that the truth may be known, I would state that I was a prisoner of war for twelve months, and was in Andersonville when the delegation of prisoners spoken of by Jefferson Davis left there to plead our cause to with the authorities at Washington; and nobody can tell, unless it be a shipwrecked and famished mariner, who sees a vessel approaching and then passing on without rendering aid, what fond hopes were raised, and how hope sickened into despair waiting for the answer that never came.

In my opinion, and that of a good many others, a good part of the responsibility for the horrors of Anderson rests with General U.S. Grant, who refused to make a fair exchange of prisoners.”

Barney was present for the trial and execution in July of the infamous "Andersonville Raiders". These prisoners banned together and terrorized the rest of the camp. Finally in July the raiders faced growing opposition from fellow inmates, were overpowered and restrained. Captain Wirz permitted the prison population to put the Raiders on trial and promised to carry out their verdicts. The six ringleaders were sentenced to hang and the execution was conducted within the prison stockade by the prison population on July 11, 1864.
Posted by Brock Townsend at Wednesday, November 26, 2014