Ferguson is the window on the final two years of Community Organizer Barack Obama in the White House. 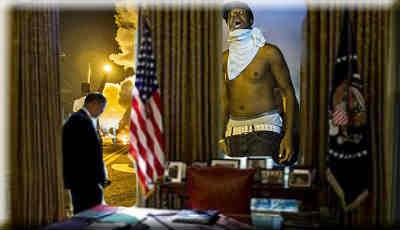 After last night, we now get a crystal clear view of what life in America will be like between today and 2016.  It will be meticulously organized staged rage to government manufactured ‘racism’ all the way down to the finish line and beyond.

That, as they say, is all he wrote.

“I also appeal to the law enforcement officials in #Ferguson and the region to show care and restraint in managing peaceful protests,” Obama tweeted last night.

It is not Ferguson law enforcement officials managing peaceful protests, it is a community organizer and his long-time buddies stirring the boiling-over pot behind the scenes.

Proof of this pudding?

Did Obama take to his omnipresent phone to deliver the same message of showing “care and restraint” to his good buddy race baiter supremo Al Sharpton?

Not on your life!

“The stage”, as Doug Hagmann wrote on Canada Free Press last night, “is being set for something much bigger”.