These two memorials in Bavaria honor the memory of French Waffen-SS soldiers who were killed at the end of the war by their own countrymen. I will not reveal the exact location of these, since left-wing extremists destroyed the 1st SS Panzer Korps memorial at Marienfels in April 2004. These 12 soldiers (some sources say 11), French volunteers of the 33rd SS Grenadier Division "Charlemagne," had been fighting on the Eastern Front but were in a hospital at the end of the war. They surrendered and were moving to a POW area, but were stopped by French forces under Gen. Philippe Leclerc. Declaring them to be "Boche" and traitors, Leclerc ordered them to be shot, which was done just before the end of hostilities. Their bodies were left lying on the ground, to be buried a few days later by American soldiers. A few years after the end of the war, they were reinterred in the local town cemetery. Their sacrifice is remembered each year by their comrades and other veterans.  (my sincere thanks to my friend Ralf Hornberger for showing me these sites)

Although the Marienfels 1st SS Panzer Korps memorial has apparently been rebuilt in Fretterode in Thüringen, the first memorial shown below, marking the site where these soldiers were executed and initially buried, was removed in October 2007 by local authorities. There is nothing there now but a bare patch of ground. This is yet another example of the extreme difficulty that Germany still experiences in dealing with its past. 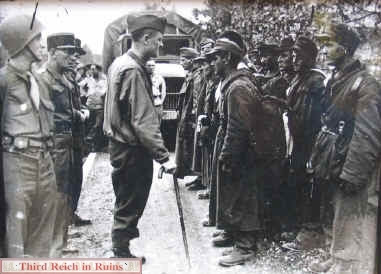 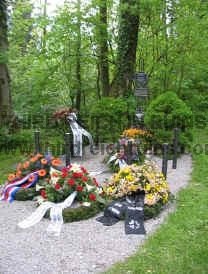 The photo above shows Gen. Leclerc confronting the prisoners. Below that is the memorial where they were shot and originally buried. The memorial wreaths bear inscriptions such as "To Our Murdered Comrades," "If All the Brothers Remain Silent" ("Wenn alle Brüder schweigen"), "When All Become Unfaithful, We Remain Truly Faithful," "We Respectfully Honor the Memory of the Brave Heroes of the Waffen-SS," "Their Honor Was Loyalty."

Like many small towns in the U.S. (especially in the South), many towns and even small villages in Germany have war memorials to their sons who have fallen in battle. These tend to be more prevalent in Bavaria, and they start with memorials to the 1866 war of Prussia vs. Austria (when the Bavarians fought unsuccessfully for Austria). The memorials continue to the Franco-Prussian War of 1870-71 (in which the Bavarians fought on the victorious Prussian side), and on to World War I. Some of the World War I monuments are large and elaborate, featuring sculptures that are both expressive and moving. Many towns later added the names of the World War II casualties to these earlier monuments.

These monuments are the sites for annual memorial ceremonies, very similar to Memorial Day in America. These services take place on two Sundays in November - Volkstrauertag and Totensonntag (the last two Sundays before Advent).