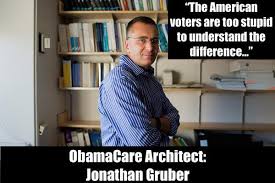 The man who changed the ObamaCare debate was at a gas station when I reached him, and he wasn’t dying to talk.

“I really want to stay out of the limelight,” said Rich Weinstein, a Philadelphia investment adviser.

But it is about him in the sense that if not for one slightly obsessed citizen, we wouldn’t have the videos of Jonathan Gruber saying the health care law was deceptively designed and its passage depended on the stupidity of the American public. And it is about his frustrating struggle to get that information out to the media.

Still, Weinstein would not be coaxed into an on-camera interview, or even provide a photograph. He doesn’t want his 15 minutes.

“I think people are going to look for a target. I don’t want to be Rich the Plumber,” he told me.