The Islamization of Jerusalem 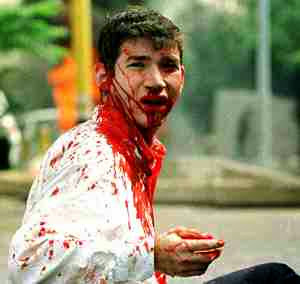 Chaya Zissel Braun was murdered on her first trip back from the Western Wall where the indigenous Jewish population of Israel continues to pray in the shadow of the shrine established there by the Muslim conquerors from which the racist Muslim settlers rain down rocks on the Jewish worshipers.

The three-month old baby girl died when a Muslim terrorist rammed a car into a crowd hurtling her into the air and headfirst into the pavement. Her death did not take place in isolation. It was not caused by a tiny minority of extremists. Her blood was spilled on the street for the Islamization of Jerusalem.

They are demanding it with words and boycotts. But the Muslim settlers, on whose behalf they cry for the Apartheidization of Jerusalem, are writing their own demands with the blood of little girls.

The baby girl was murdered to Islamize a city. She died as the Israeli soldiers had died reunifying Jerusalem after the Arab Legion had ethnically cleansed the Jewish population and as ordinary Jerusalemites had died at the hands of Jordanian snipers searching the city for Jewish and Christian targets.  The victims of those years of Muslim occupation included Yaffa Binyamin, a 14-year-old girl sitting on the balcony of her own house and a Christian carpenter working on the Notre Dame Convent.