Psychopolitical Warfare and the Soviet Brainwashing of the United States 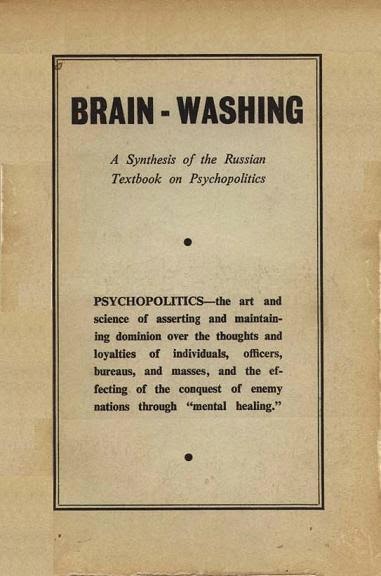 Do you want to know how it all happened? Do you really want to know the cause behind the rapid deterioration in the United States of America from a domestic cold war of incremental democratization, into a hot totalitarian socialist State? Aside from an abject hatred for religion and morality, one of the root causes of the accelerated decline is "psychopolitics," the art and science of asserting and maintaining dominion over the thoughts and loyalties of individuals, officers, bureaus, and masses, and the effecting of the conquest of enemy nations through "mental healing."

Psychopolitics, at its very core, is the Soviet art of brainwashing. Since 1933, the United States has been subject to a far-reaching and comprehensive campaign of psychopolitical warfare aimed at subverting and destroying our Constitutional Republic, and according to the Lucille Miller case of 1950, to "recruit every agency of the nation marked for slaughter into a foaming hatred of religious healing."

"During the past few years, I have noted with horror the increase of psychopolitical warfare upon the American public. First, in the brainwashing of our boys in Korea [who fought on behalf of the United Nations (source) by unlawful Executive authorization of President Harry S. Truman], and then in the well financed drive of mental health propaganda by left-wing pressure groups, wherein many of our states have passed Bills which can well be used by the enemies of America to subject to torture and imprisonment, those who preach the gospel of our Lord and Saviour Jesus Christ, and who oppose the menace of Communism." ― Kenneth Goff, Congressional Report to the Dies Committee on Un-American Activities, regarding his infiltration of the Communist Party of the United States from 1936-1939.