NC: Help Save the Name of Governor Charles B Aycock 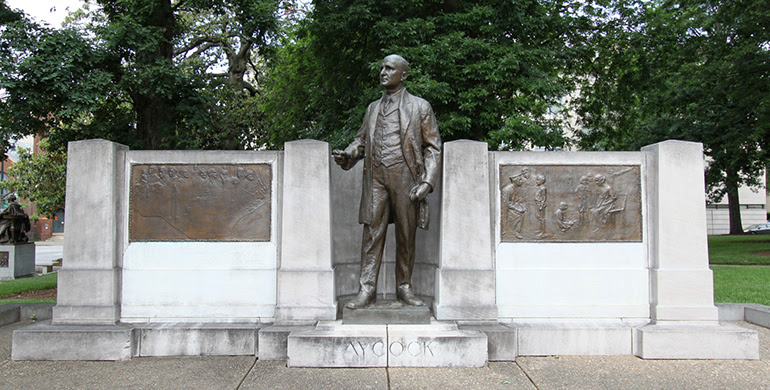 I am writing this in defense of Govonor Charles B Aycock, a great Statesman and a champion for Blacks in the State of NC. There are misguided people in NC wrapped with hate that would like to destroy all Southern History and are going to do so unless you and I stand up to them. I understand the University may drop the name of Aycock from your campus. I am writing this statement in defense of Gov. Aycock and wish you to consider the History behind it. I also understand that you and the Trustees are to take up the matter this coming week.

The defense for Gov. Aycock is the context of his times and how he stood up for blacks against universal popular opinion in North Carolina and the whole country to keep them down.

In 1900, white supremacy was the reigning ideology in all of America. This was especially so in the North and Midwest. The intellectual bastion of white supremacy was Harvard, with its School of Scientific Racism. The U.S. Supreme Court had rendered in 1892 its decision in Plessy v. Ferguson allowing racial segregation in the public realm. All the states then started implementing racial segregation. This was the key issue for Progressives to support.

Both the Democratic and Republican parties in every state and at the national level were expelling blacks from public office and from any influence. With much pride and acclaim, the Democrats called it "Jim Crow" and the Republicans called it being "Lily White."

Josephus Daniels as Editor of the Raleigh News & Observer was the most vocal and the leading proponent fin N.C. for white supremacy and attempted to use Aycock as his tool.

The most notable quote from Gov. Aycock is the "equal right of every person for the opportunity to burgeon out all that is within him." He further said before he died that "equality" is what he wants to be known for.

This is the sentiment of a true egalitarian, and not that of a white supremacist.

Gov. Aycock was an egalitarian during the heyday of racial inequality.

I urge you and your colleagues to reconsider the thought that Aycock was racist and consider the facts of a man that cared for all and allow the memory of Aycock to stand on your campus.