Terrorism in Rhodesia/Zimbabwe: Anatomy of Terror 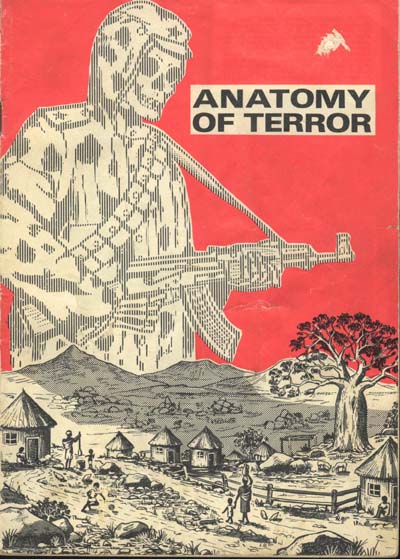 
This is one of the old but important stories from the original AfricanCrisis website that I am converting on to the new site, in the new format.

I remember seeing this booklet when I was a kid growing up in Rhodesia. It was published by the Rhodesian Government and distributed. But these days, finding copies is difficult. I actually got this copy from a Colonel in the South African army. I was absolutely delighted to find it.

There is another Rhodesian Government publication which has a similar theme. It is also a rare booklet. It is called: "Massacre of Innocents" and shows babies that were murdered by the cowardly terrorist trash who came to rule Zimbabwe.

Of course, murder was a tool to get into power and it remained a tool for staying in power. One day, we will discover how many black people Robert Mugabe and his trash have killed and it will shock people. The remains have to be pulled out of rivers, from lake and dam bottoms and from mine shafts. But these photographs show the early days. This is how it started, and now, 40 years later the murder continues. As we say in Africa: A Leopard doesn't change its spots. Jan

Here you will see a very rare publication. It was produced by the Rhodesian Government to show what the black Liberators did to their enemies and to those they suspected of working with the whites. Terrorism was also used as a way of getting the population to go along with them.