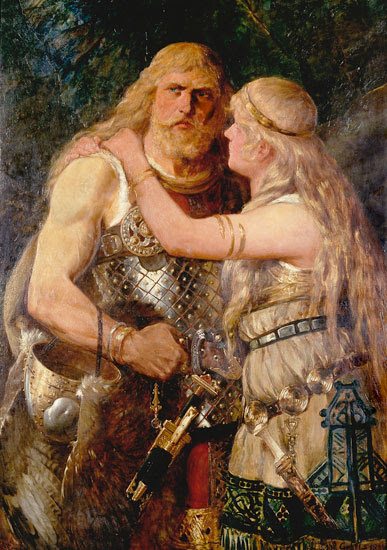 Part 2 of a Series

In the late summer of 9 AD, Arminius, a young chieftain of the Cherusci, was secretly plotting with the chieftains of five other Germanic tribes and his most trusted political allies among the Cherusci, including officers of his own Roman auxiliary cavalry cohort, to destroy the three Roman legions commanded by Governor Quinctilius Varus. Varus had a well deserved reputation for imposing heavy tax burdens and ruthlessly enforcing them in Roman provinces. While Governor of Syria and Judea, he had crucified over 2,000 Jews for rebellion against Roman rule. At this point in history, Germanic culture frowned upon autocratic rule. They had the idea that the laws they had embraced by cultural consensus superseded the will of any leader. In fact, it could be said of them that they had strong egalitarian tendencies, and leadership was often ad hoc. Before their recent defeat by Roman armies under Tiberius, they considered submission to Roman Law worthy of the death penalty.  Only the Roman heel on their neck prevented them from enforcing it. For many German leaders the new Roman tax imposition was the last straw before renewed rebellion against Rome and its governor.  Not all agreed. Some thought resistance to Rome was futile and subordinated their culture to Rome.

Many considered Arminius’s plan unlikely to succeed. He could not expect to match half the Roman manpower or their superior weapons and awesome discipline, but he planned to lure the Roman legions into the Teutoburg Forest and concentrate his forces where they could overwhelm small segments of the exhausted and confused Roman columns and destroy them in detail. Roman commanders usually knew better than to march large forces through dense forests or marshes.

Arminius, however, had studied Roman warfare as he soldiered for them in the Balkans. He had also spent part of his boyhood as a hostage in Rome. Moreover, he had studied Varus and knew his weaknesses. The plan had to be kept within a tight circle until the time was right and then communicated throughout the rebel forces.

Secret rebellion was brewing among the Germans, but Arminius’s first step was to fabricate rumors of active rebellion to the north that required urgent attention. The next step was to convince Varus that the rumors were true and that quick and decisive action was absolutely necessary to quell the revolt before it became a raging fire. Varus’s legions were camped on the Weser River in Cherusci territory for the summer but were preparing to march to quarters on the Rhine, where they could easily be supplied during winter. Their route west would hold just north of the Lippe River and pass just south of the rugged low hills of the Teutoburg Forest.

In addition to three legions, the 17th, 18th, and 19th, Varus’s force included an elite cavalry wing for each legion and six auxiliary cohorts, which were mixtures of infantry and cavalry. Roman auxiliary cohorts were predominantly manned by non-citizens, both professional and local mercenaries.

Auxiliary leadership tended to be about half Roman and half foreign, either promoted from the ranks or through political appointments rewarding provincial loyalty.  A Roman legion consisted of about 5,500 infantry with engineering, artillery, and archery support. An elite cavalry wing of about 500 brought the total to 6,000. The Auxiliary cohorts were usually about 500 in strength. Thus the military force with Varus consisted of 18,000 in the legions and 3,000 in the auxiliary cohorts for a total of 21,000; In addition, they were followed by at least 1,000 camp followers with their baggage.

On the night before their march, Segestes, a Cherusci noble and the father-in-law of Arminius, informed Varus that Arminius was planning a rebellion and intended to betray the Roman leader.

Segestes had opposed the marriage to his daughter, Thusnelda, to Arminius, and this had been the source of on-going feud between the two men. Varus was probably aware of this, and therefore rejected Segestes’s accusation. He trusted Arminius and valued him as a key advantage to his own triumphant success in Germania.

The Romans had built watch towers on the forest side of their march along the north bank of the Lippe.  Each was probably manned by an eight-man squad. On the first day of their march along the Lippe, a small rebel force of auxiliaries, probably cavalry, approached the first tower. The auxiliary troops were wearing the standard Roman breast-plates and uniforms, so the tower guards assumed they were friendly forces protecting Varus’s right flank or bringing some news. They were mistaken.

On reaching the tower, the rebel force promptly murdered the tower guards and set fire to the tower. Their main objective was that Varus and his officers would see the smoke in the distance and believe Arminius’s account of the rebellion north of the Teutoburg Forest. Other rebel forces, probably auxiliary cavalry, burned other towers and murdered their guards. They also murdered small detachments of Roman soldiers who had been dispatched to handle reported crimes against the Empire.

According to British historian Edward Creasy, the burning towers were “represented to Varus as an occasion which required his prompt attention” in putting down a serious rebellion breaking out north of the Teutoburg Forest. He was kept unaware that a real multi-tribal rebellion was positioning forces in the forest, and its supporters were, in fact, all around him. Arminius convinced Varus that by far the most expeditious route to squelch and punish his fabricated rebellion was through the forest, and of course, offered himself and his key officers as expert guides. Indeed, Arminius had already planned the route, which included numerous opportunities for German ambush.

The next morning, a Roman force of more than 22,000 was led northwest into the Teutoburg Forest by Arminius and one of his cavalry detachments.  Arminius quickly made the excuse to leave with his remaining cavalry to protect the Roman right flank and gather allied tribal forces. A long, winding column of three Roman legions and auxiliary troops stretched through the forest for 9 to 12 miles.  To be continued.
Posted by Brock Townsend at Sunday, February 22, 2015