Anti-Obama Letter To The Editor on Memorial Day

Via comment by Anonymous on Memorial Day Meditation: Obama Creating A New “Hol... 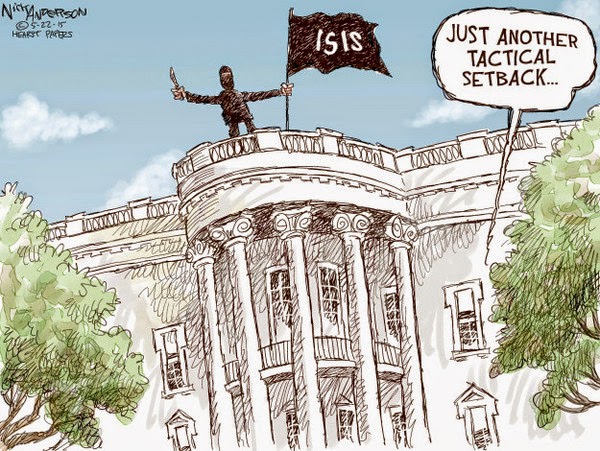 (I checked the paper, but couldn't find this piece, though did find three comments critical of it, so I guess they took it down. BT)


A letter sent to the Sunbury Daily in Pennsylvania by a reader and was published by
the editor.

What is a Ramadi?

Recent national news reveals that ISIS has recaptured Ramadi in Iraq. I assume that we’re expected to ignore the loss of Ramadi to ISIS. Our lead-from-behind coward-in-chief has been strangely quiet on the subject. While he seldom misses the chance to run his mouth on any subject that suits his agenda, apparently he’s having trouble discussing a situation which has become a complete debacle and for which he alone is responsible.

After all — we’re supposed to be friends with our enemies. By all means — expedite withdrawal of U.S. forces, contrary to the advice of those military commanders who cautioned against withdrawal. But their advice was ignored and many were purged because they refused to follow someone so grossly incompetent in the politics and practice of warfare.

So now we’re learning the results of spending billions of taxpayer dollars and thousands of American lives that were expended in the initial capture of Ramadi. Our esteemed leader proclaimed that we should withdraw because the Iraqis were offended by the presence of American troops in their country. So we bailed out — leaving behind billions of dollars of equipment and ammunition, which was promptly captured by ISIS. Yes, this is the same highly skilled organization that our misguided leader called the JV team.

Hey Barack, would you care to address the nation and expound on your grandiose plans for defeating this JV team which is whipping you soundly?

The saddest part of this situation is the realization that the American blood lost in the initial capture of Ramadi was apparently lost in vain, due solely to the gross incompetence of our commander-in-chief.

To the families of those fallen heroes whose blood lies on the sands of Iraq; don’t you think it might be time to rise up against an administration who has adequately
demonstrated their gross incompetence?

I think the appropriate, and politically correct, term is regime change. Forgive me for being blunt, but throughout history this has previously been accompanied by execution by guillotine, firing squad, public hanging.

I have absolutely no reason to expect that current practice should be any different. The end result is elimination of the problem, the method is superfluous. When society dictates, the end always justifies the means, otherwise the action would not be taken.

We are out there, somewhere!
Posted by Brock Townsend at Tuesday, May 26, 2015