Via David "I am a Jew, married to a Muslim (yes, there ARE "moderate" Muslims). We have two beautiful kids, who we are raising as Jews with my wife's enthusiastic consent. We've officially converted them, and attend Shul (Synagogue) on Friday nights. Eventually, as the kids get older, I'm hoping to get them to Saturday morning services, but those can be long and I don't want to turn the kids off. (Smile: My daughter already talks about G-d, and how He is the "biggest thing there is".)

But not all Muslims are as easy-going as this. I see the guy in the Verizon store who, while friendly, bragged about learning Arabic so he could read the Koran in the original language, and who now sports a beard. Even my wife, one day at the apartment complex where we used to live, saw a woman in the full Niqba and, as we were out on a walk, clutched my arm and said "Oh no, they're here... I am afraid." Later, as she worked in a retail store, she would come home, tell me about the robed women that would come into her store, and wonder just what they might be hiding under the robes. So I wonder... what will it take for The West to wake up to this threat? Just how many have to die?

Or, as I sometimes fear, we will still have denial as our peoples in the West are mowed down in their malls and streets by people shouting "Allah Akhbar!" as our "moral and intellectual betters" assure us this has nothing to do with Islam. Just as I wonder, with "shockers" about this Iran deal, and the tactics Barackus is using to cement it at the UN before Congress even has a chance to review it, what it will take for my fellow American Jews to wake up to the fact that he is our enemy, and an enemy of Israel" 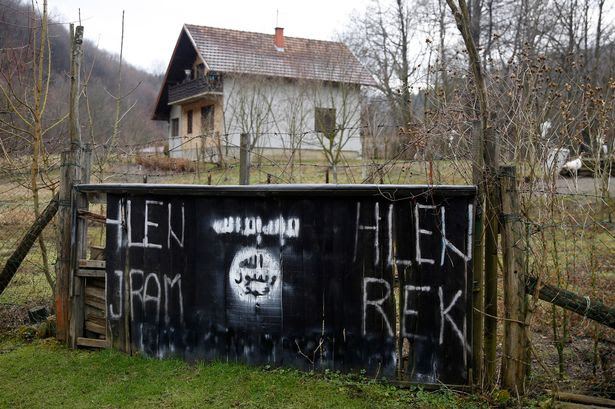 Terrorists are secretly buying land in an isolated village, surrounded by deep woodland.

Security services think the area in Bosnia is used for ISIS training camps and could be a base for devastating terror attacks on the West.

Crucially, the location gives IS a key strategic position due to its proximity to the Mediterranean which is used by extremists from Syria, Iraq and North Africa.

At least 12 ISIS fighters trained in the village of Osve have left for Syria in recent months and five are reported to be dead.

Terror expert Dzevad Galijasevic said: “From this village a large number of people went to Syria and are going constantly.


More with pictures and video @ Mirror
Posted by Brock Townsend at Sunday, July 19, 2015