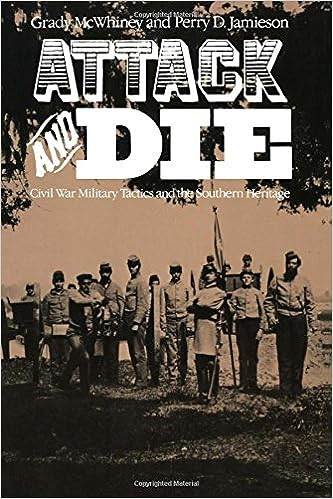 The South believed the invader of their land inferior and recalled that Hannibal had destroyed more than ninety percent of a vastly superior Roman army; Frederick the Great defeated an army twice the size of his in 1757; and Zachary Taylor defeated 15,000 Mexicans at Buena Vista in 1847 with 5,000 troops. Historian Bell Wiley noted: “Indeed, it is doubtful that any people ever went to war with greater enthusiasm than did Confederates in 1861.”

“General Robert E. Lee had decided to disregard the advice of a division commander [to] assault the strong Federal position [at Malvern Hill]. For the task he selected country boys and men from the Deep South . . . together with regiments from North Carolina and Virginia. These were proud soldiers, even a bit cocky now because for nearly a week they had been pushing Yankees back . . . [the enemy general] thought they came on with “a reckless disregard for life . . . with a determination to capture our army, or destroy it.”

At Sharpsburg a Federal remembered that the advance of his unit was stopped by a “long and steady line of rebel gray . . . sweeping down through the woods.”

Another Northerner recounted the “invincible bravery” of the attacking Confederates and how his regiment “opened a withering, literally withering, fire on the rebels . . . but they still advanced. A color-bearer came forward within fifteen yards of our line, and with the utmost desperation waved a rebel flag in front of him.

Our men fairly roared, “Shoot the man with the flag! And he went down in a twinkling and the flag was not raised in sight again. Several charges at Sharpsburg cost the Twenty-sixth North Carolina Regiment sixty-two percent of its 325 men. One company lost all but five of its 30 men; two-thirds of the men and all of the officers in another company were killed or wounded.

The South lost 175,000 soldiers in the first twenty-seven months of combat. This number was more than the entire Confederate military service in the summer of 1861 and it far exceeded the strength of any army that Lee ever commanded. More than 80,000 Southerners fell in just five battles. At Gettysburg, three out of every ten Confederates present were hit; one brigade lost sixty-five percent of its men and seventy percent of its field officers in a single charge.

A North Carolina regiment started the action with some 800 men; only 216 survived unhurt. Another unit lost two-thirds of its men as well as its commander in a brief assault.”