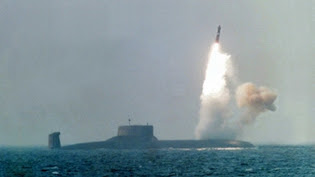 Russia is doubling the number of its strategic nuclear warheads on new missiles by deploying multiple reentry vehicles that have put Moscow over the limit set by the New START arms treaty, according to Pentagon officials.

A recent intelligence assessment of the Russian strategic warhead buildup shows that the increase is the result of the addition of multiple, independently targetable reentry vehicles, or MIRVs, on recently deployed road-mobile SS-27 and submarine-launched SS-N-32 missiles, said officials familiar with reports of the buildup.

“The Russians are doubling their warhead output,” said one official. “They will be exceeding the New START [arms treaty] levels because of MIRVing these new systems.”

The 2010 treaty requires the United States and Russia to reduce deployed warheads to 1,550 warheads by February 2018.

The United States has cut its warhead stockpiles significantly in recent years. Moscow, however, has increased its numbers of deployed warheads and new weapons.