Via comment by Anonymous on Shocking number of white squatter camps in South A... 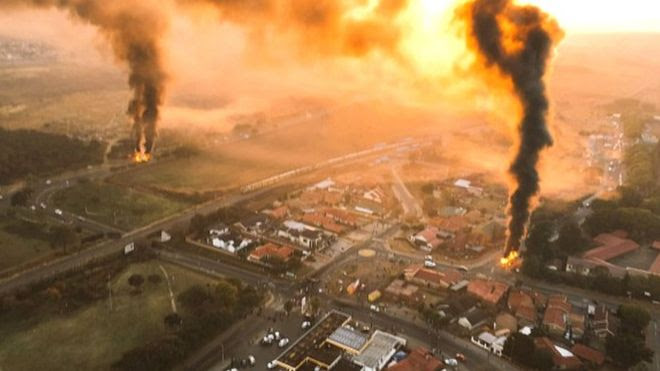 Pretoria is burning. Apparently the blacks are upset that the useless ANC has nominated Thoko Didiza (a Zulu woman) as executive mayoral candidate for Pretoria instead of current mayor Kgosientso "Sputla" Ramokgopa (a Pedi).

Thoko Didiza held the post of Minister of Agriculture and Land Affairs from 17 June 1999 to 22 May 2006 and Minister of Public Works from 22 May 2006 to 25 September 2008 when Mbeki resigned she handed her resignation in as well, but later crawled back to Zuma.

However, Ramokgopa has been very critical of Zuma and called on him to resign and therefore is being kicked to the curb by the Msholozi gang.

I still cringe whenever I think of that advert.

The Blacks of Pretoria are saying: They can’t bring a Zulu to govern over Tswanas, Tsongas, Vendas and Pedis and They will vote DA if Sputla is replaced by Ramokgopa

On Monday night 20th of June at least 19 buses were set alight and City of Tshwane (Pretoria) workers had to be withdrawn from several townships for their safety. The N1 near Hammanskraal and the Darspoort tunnel in Pretoria West have been blocked by protestors.

Residents have chased away journalists, saying they don't want media in the area.

Of course the SABC has censored any footage of the events and refuses to read newspaper headlines about it. Last I checked…the DA couldn’t stop smiling.
Posted by Brock Townsend at Monday, June 27, 2016