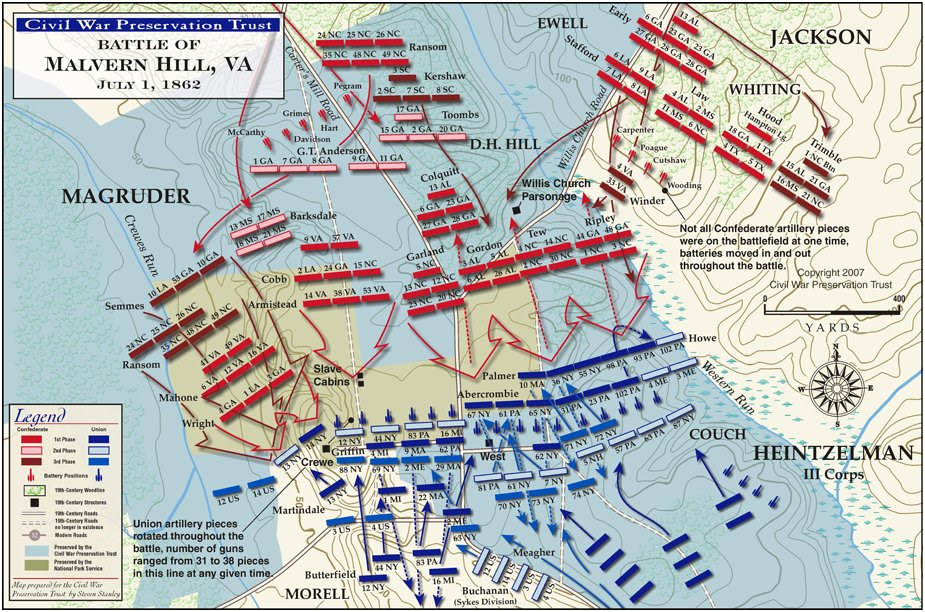 After the costly Confederate assault on Malvern Hill on June 30, 1862, Stonewall Jackson ordered burial details to carry their dead from the “killing ground.” Author S.C. Gwynne writes that “Unlike most Civil War battles, in which artillery caused less than 5 percent of casualties, at Malvern Hill more than half of the Confederate dead and wounded had been victims of Federal solid shot, shell, spherical case, and canister. After such carnage in a war between Americans — one side fighting for independence from the other — it is a wonder that Lincoln did not raise his hand to halt the bloodbath and allow the South to govern itself in peace.
Bernhard Thuersam, www.Circa1865.com   The Great American Political Divide

“The place was more like a killing field, a defensive position that Fitz John Porter, architect of the fearsome [Northern] works at Mechanicsville and Gaines’s Mill, considered to be the strongest of the campaign so far.

The Union advantage started with its artillery: 268 cannons, many of them rifled, plus 26 giant siege guns that McClellan had been preparing to use against Richmond. The guns were everywhere: stacked on the brow of the hill, bristling on the army’s flanks, and even ranged in front of the infantry, where their flesh-tearing canister loads would enjoy a clear field of fire. Around them, stacked to the top of the rise, were the blue masses of infantry, fifty-four thousand of them.

The borders of the amphitheater were unassailable: ravines, swamps, streams and thick woods meant that the Union troops could not be flanked. Which meant the Confederate attack would be funneled into a narrow front with no cover. The rebel infantry would have to attack the Union position by coming up the rise, straight into the teeth of the strongest artillery emplacement of the war.

It looked like suicide, and Jackson and his brother-in-law [Gen.] D.H. Hill, who formed the Confederate left at the base of the slope, and along with [Gen. Benjamin] Huger’s and [Gen. John B.] Magruder’s troops would do the fighting this day, understood this at once.

For the Union gunners, the battle was more like a large-scale turkey shoot. Whenever a Confederate battery would unlimber, the massed Union guns would open on it, blowing it to pieces. When Jackson [ordered division commander Gen. W.H.C. Whiting] to bring up his guns . . . it took a moment for the Union batteries to register this. And then they blew the guns, wagons, men, horses, limbers, and caissons to bits.

Jackson, meanwhile, continued giving orders, in one case while a battery was being destroyed before his eyes. “He sat erect on his horse in this hurricane of canister and grape,” recalled one soldier, “his face was aflame with passion, his eyes flashing,”

Other Confederate gun crews were just as helpless before the massed counterbattery fire from the hill. After the war, McClellan’s chief of artillery . . . told Jackson’s artillerist Tom Munford, chillingly, how easy it was to destroy the rebel guns. He said he had “fifty pieces massed at Malvern Hill which he could concentrate on any battery that came out in the open and that they melted like wax before his rain of projectiles.”

Magruder’s first attacks did nothing but sacrifice several thousand men to Federal artillery and musketry [though they] became an inadvertent signal . . . for a general advance. The result was pure slaughter, some of the worst of the war. To their credit, the Southern infantry did not give up. They pressed attack after attack and were badly shot up, a huge percentage of hem by artillery. “It was not war, it was murder,” said D.H. Hill later.”