Confederate monuments are coming down in NOLA 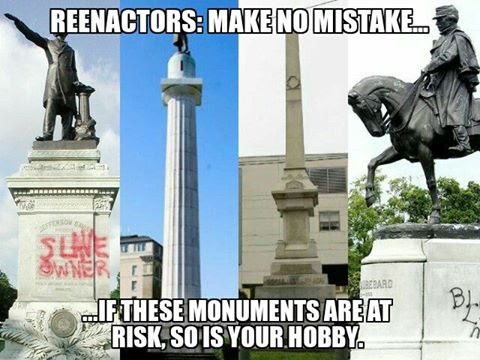 This is deeply disgusting on so many levels:

“On the same day that some southern states were honoring their rebel heritage, masked workers in New Orleans dismantled a monument to that past — chunk by chunk, under darkness and the protection of police snipers.

“We will no longer allow the Confederacy to literally be put on a pedestal,” Mayor Mitch Landrieu (D) said after a 19th-century obelisk honoring what the mayor called “white supremacists” was taken down early Monday. …

After a small group of protesters dispersed about 1:30 a.m., police officers barricaded surrounding streets, and snipers took position on a rooftop above the statue, according to the Times-Picayune. By 3 a.m., workers were drilling into the obelisk’s pale stonework.

Contractors wore face masks, helmets and what one reporter described at a news conference the next morning as “militarylike bulletproof vests.” Landrieu said the workers were disguised for their protection. …”

What lessons can we draw from this?

1.) We stayed out of these heritage fights for a reason. We wanted to illustrate that groups like the SCV are incapable of preserving our heritage with their preferred methods.