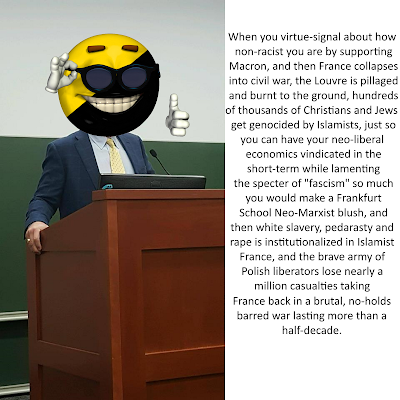 Je suis desole'. Pauvre France.   Macaroni is the vanilla Obama . . . a quasi commie and he'll bring France to her knees.

At first my reaction was as noted above.  Then I remembered a couple of recent polls taken her in the OOSAH.  The gist of these was that the Snowflake Generation is perfectly at ease with an all powerful, centralized authoritarian government, and would cheerfully elect Macaroni themselves, had they the chance.  What with the force of demographics eliminating so many of my peers every day, its inevitable that the Twits will eventually outvote the few remaining Americans, and we'll get our very own Mugabe or Zuma.

Now I'm even more miserable . . . I've got grandkids coming up, and likely a couple amongst that Snowflake cohort already.

At my age. I doubt Roosha would take me in, especially since my most recent military training encompassed the Pike and the Arquebus.

Afterthought: The ZULUs were a great Warrior people, who created a vast empire in Africa.  They yet maintain their separate existence in Africa and their king.  Unfortunately we didn't get the Zulu people, when the distribution was being made. We got the dregs of East Africa, conquered peoples sold for slaves to the Arab traders, and passed on to gullible Europeans.  These are those to whom I refer as 'Zero's.  Nul quantities.