VETS LOOSE 4 – 1 in BATTLE OF GAINESVILLE 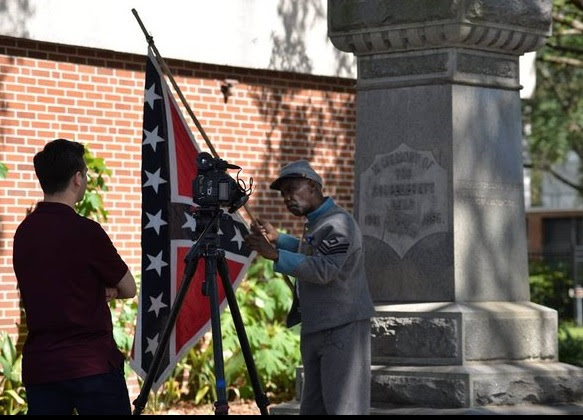 HK Edgerton visiting Memorial on his 2016 Southern Cross Revival March
Ignoring the voice of the voters, the Alachua Co. Commission caved to the cultural Marxists including “Anti-fa”, “Black Lives Matter” and “white-guilters” and in a new entrant, the “Uhuru” movement, feigned “Southerners” in a sad display of ignorance and hate last night by voting 4-1 to purge the War Memorial from County property.
“Turn this thing into rubble”, “it’s a symbol of white supremacy” and “more Southern blood should have been shed” were some of the rants offered by the ‘take it downers’ who offered ‘Peace”, “inclusiveness” and “unity” as justification in supporting Commissioner Byerly’s motion to box up the War Memorial and get rid of it as “surplus property”.  “It’s already been a hundred years…his time is up” said one individual, who demanded that the War memorial be moved in 60 days.  “The protesters didn’t sound ‘inclusive’ to me – they sound exclusive” said Save Southern Heritage – FL spokesman David McCallister.
The ‘take it downers’ were primarily young white UF students wearing black – many who were interviewed earlier and attesting to being anarchists that opposed any jurisdictional authority or rule of law.
The irony was not lost on Melanie Barr, who spoke on behalf of a black resident, Lizzie Jenkins, whose family survived the Rosewood massacre.  “She opposes moving the Memorial” said Barr.  Ms. Barr also wondered “if black residents of Alachua County are so upset, why aren’t they at the meeting calling for its removal”.
More @ Save Southern Heritage