It All Grows More Than A Bit Tedious And Predictable. But It Remains Dangerous For The President. 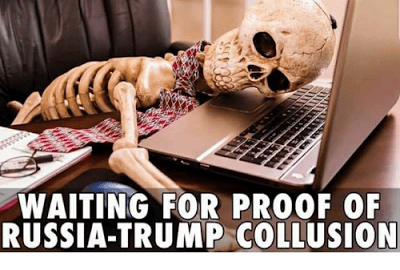 Having been both sorely disappointed and newly out rates that ex-Director Comey didn't create Donald Trump's bleeding corpse into the Senate hearing room the left is now embarked on pursuing even the most absurd of notions as if to try and prove him guilty by either ignoring recent example or crude simplistic analogy to a 400 year old fictional play. I kid you not.


News was released today that the Attorneys General of both Maryland and the District of Columbia are filing suit claiming that Donald Trump's businesses receiving money under legally executed contracts from foreign entities constituted a "conflict of interest" that they of course want the courts to interpret for them as an impeachable offense.

Never mind of course the millions if not billions of dollars the Clintons pocketed from everyone from the poor storm ravaged citizens of Haiti, to Kremlin linked Russian banks, to every corrupt and xenophobic Muslim Potentate between the Pillars of Hercules to Straits of Oman. Nope, no collusion or influence peddling involved there. "Move along folks there's nothing to see here."