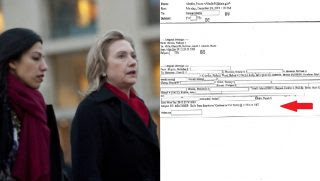 Just because former secretary of state and failed Democrat presidential candidate Hillary Clinton didn’t win the 2016 election, that doesn’t mean that all of the scandalous activity that surrounded her and her closest associates will just go away or disappear.

Judicial Watch announced in a news release Friday that it had just published newly found documents from the non-governmental email account used by Huma Abedin, deputy chief of staff and all-around right-hand to Clinton before, during and after her stint at the State Department.

Some 448 pages of heavily redacted government documents and email chains were obtained by Judicial Watch as part of the continuation of a 2015 lawsuit filed against the State Department by the conservative watchdog group that demanded “All emails of official State Department business received or sent by former Deputy Chief of Staff Huma Abedin from January 1, 2009 through February 1, 2013 using a non-‘state.gov’ email address.”