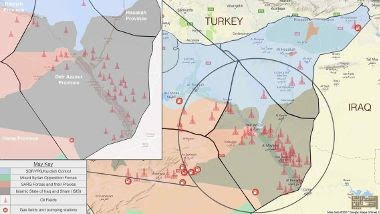 The US Central Command in the Middle East wants the oil fields in east-Syria under control of its proxy forces to set up and control a US aligned Kurdish mini-state in the area. The Syrian government, allied with Russia, needs the revenues of the oil fields to rebuild the country.

Last week the Russians issued sharply worded statements against US coordination with al-Qaeda terrorists in Idleb province and warned of further escalation.

Yesterday the Russian Ministry of Defense accused the US military in east-Syria of direct collaboration with the Islamic State: