Gaetz: ‘I Believe There Are People Who Will Go to Jail’ Over Intel Memo 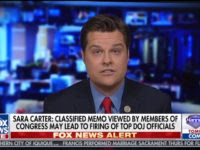 Thursday on Fox News Channel’s “Hannity,” in an appearance with Rep. Jim Jordan (R-OH), Rep. Matt Gaetz (R-FL) followed up on an earlier statement he made regarding a House Intelligence Committee memo he argued should be released to the public.

The memo regards the FBI, the Department of Justice and President Donald Trump and Gaetz claims it goes “to the very foundations of democracy.”

Gaetz described the investigation underway by special counsel Robert Mueller as “a lie built on corruption” and claimed people would “go to jail” over the contents of the memo.

“I think that this will not end just with firings,” Gaetz said. “I believe there are people who will go to jail. I was very persuaded by the evidence. And it also became clear to me why Chuck Grassley and Lindsey Graham felt it so important to refer this matter for criminal prosecution. You don’t get to try to undermine our country, undermine our elections and then simply get fired. So, I think there will be criminal implications here. And we have to underscore the point that you and Jim Jordan just made.”

“Every single Democrat on the Intelligence Committee voted against even allowing other members of Congress to see this information, so you know they’re going to fight against release to the American people,” he added. “What are the Democrats so afraid of? Why don’t they want the American people to know the truth about what was going on with the government, how that impacted the president, his transition, his campaign and it just seems interesting to me that Democrats don’t want us to know what the entire basis was in the first place for the Mueller probe they want to drag this out through the midterm elections to try to embarrass this president and distract this Congress from the critical work we have to do to save this great country. Let’s release the documents.”
Posted by Brock Townsend at Friday, January 19, 2018