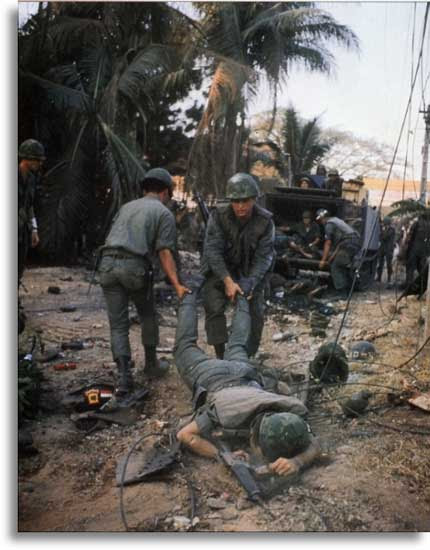 The Tet Offensive was a series of battles in the Vietnam War. It was a major offensive by the North Vietnamese Army (NVA) and Viet Cong (VC or NLF) beginning on the night of January 30-31, 1968, T?t Nguyên Ðán (the lunar new year day). It involved military action in almost every major city in southern Vietnam and attacks on the US firebase at Khe Sanh. The NVA suffered a heavy military defeat but scored a priceless propaganda victory.

The Communist forces had taken a series of military defeats. the US/ARVN forces had pacified much of the south by the end of 1967 (222 out of 242 provinces). Operation Junction City (February-March 1967) and other sweeps had seriously disrupted NLF activity in the south and forced the COSVN into Cambodia.

At a July 1967 meeting the Communist Party leadership recognised their failures and decided to re-orientate their operations to target two key political weaknesses. Firstly, the deep gulf between the US public and the US government over support for the war and its actual progress.