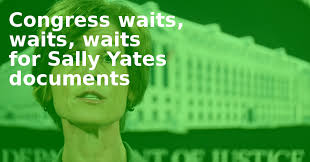 "When a holdover appointee uses that position to sabotage the incoming administration over policy differences, future administrations will be more likely to fire previous political appointees on day one, potentially leading to more dangerously rocky transitions. These stunts have consequences."

Obama appointee Sally Yates was acting attorney general under President Trump for just 10 days — from Jan. 20, 2017 until Jan. 30, 2017 — but by any measure they were consequential days. Even now, two issues from Yates' brief tenure are still of interest to congressional investigators. One was the series of events that led Yates, in charge of the Justice Department, to reject the president's executive order temporarily suspending the admittance into the United States of people from some Muslim nations. The second is Yates' role in the FBI's questioning, apparently on dubious premises, the president's national security adviser, Michael Flynn, four days into the new administration — questioning that ultimately led to Flynn's guilty plea in the Trump-Russia investigation.

Both are matters of great public significance and interest — and on both, the Justice Department is refusing to allow the Senate Judiciary Committee access to documents from Yates' time in office.