Here are the 10 Republican Senators Who Have Not Yet Committed Their Vote For Kavanaugh – CALL THEM! 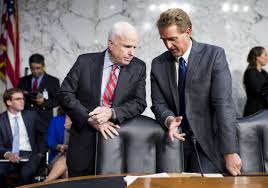 As of Monday evening, 41 Republican Senators have committed to a “Yea” vote in favor of Kavanaugh, however; 10 GOPers still have not their votes yet.

FOX News Congress reporter Chad Pergram has been reporting all day that sources are telling him Kavanaugh does not have 51 ‘yea’ votes yet.

Brett Kavanaugh needs a minimum of 50 Senators to vote ‘yea’ — and a vote from VP Mike Pence would take him to 51-49.