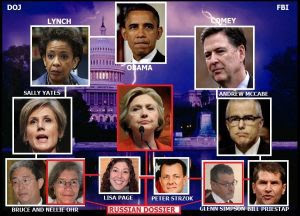 Normally when salaried employees work overtime and on Sundays to get their job done they would be considered super achievers. But not so with the Deep State FBI and DOJ – their overtime efforts were all in an effort to overthrow the incoming Trump Administration.

The Deep State actors in the attempt to overthrow the Trump Administration were corrupt and criminal but they weren’t lazy. Before President-elect Trump’s Inauguration, these corrupt employees of the Obama Administration even worked overtime and on the weekends to usurp the will of the American people.