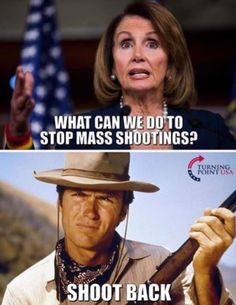 LET'S be honest. He's scared of the thing. That's understandable--so am I. But as a girl I have the luxury of being able to admit it. I don't have to masquerade squeamishness as grand principle-in the interest of mankind, no less.

A man does. He has to say things like "One Taniqua Hall is one too many," as a New York radio talk show host did in referring to the 9-year old New York girl who was accidentally shot last year by her 12-year old cousin playing with his uncle's gun. But the truth is he desperately needs Taniqua Hall, just like he needs as many Columbines and Santees as can be mustered, until they spell an end to the Second Amendment. And not for the benefit of the masses, but for the benefit of his self-esteem.

He often accuses men with guns of "compensating for something."