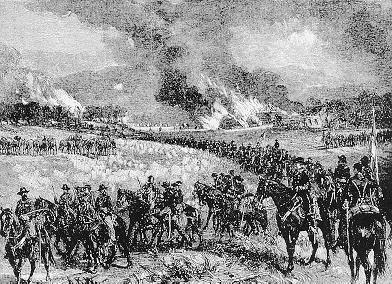 Clifford Dowdey, in his book The History of the Confederacy 1832-1865  had some commentary about the subject of this article, Philip H. Sheridan and it was not particularly complementary. Mr. Dowdey noted of Sheridan that he “…was an undersized man (five feet three) with an oversized head, in all ways…But Grant perceived in the man a quality he wanted in his all-out, no-holds-barred war of total conquest. The Sheridans, Milroys, and Hunters had a different kind of arrogance from the neo-princelings of the Cotton South. They had the arrogance of unrestrained might. Without regard for rights–of belligerants or fellow citizens or even of the so-called ‘human rights,’ let alone of the Union–these bully boys had a lust for physical violence and wanton destruction.”