Just over half of voters still believe in the likelihood of an illegal high-level effort to stop the Trump presidency, but not nearly as many expect anyone to be punished for it. 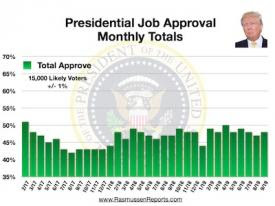 Friday, October 18, 2019
Just over half of voters still believe in the likelihood of an illegal high-level effort to stop the Trump presidency, but not nearly as many expect anyone to be punished for it. Voters are evenly divided over which of the major 2016 presidential campaigns is more likely to have had illegal foreign help.
A new Rasmussen Reports national telephone and online survey shows that 51% of Likely U.S. Voters think it’s likely senior law enforcement officials broke the law in an effort to prevent Donald Trump from winning the presidency. That includes 34% who say it’s Very Likely. Thirty-six percent (36%) consider high-level illegality as unlikely, with 22% who say it’s Not At All Likely. Thirteen percent (13%) are not sure. (To see survey question wording, click here.)